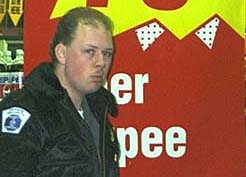 What the fuck!" Duke muttered, amazed at what he was seeing in the darkened store. A thin curtain of smoke was rising from under the baseboard like an inverted waterfall. It stretched the entire length of the left wall.

Holy shit, the joint's on fire! I better get the fuck out of here, he thought, turning back towards the bathroom window he'd just busted to get in. But then he noticed something odd-the smoke smelled like marijuana-one of his favorite things-so he hesitated a moment-and then he became aware of the pounding and shaking-it felt like an enormous semi grinding down St. Mark's Place in second gear.

And, finally, he picked up on the sounds; shouting, cursing, music (Duke had problems with his hearing-way too much heavy metal over the years).

"Jesus, must be some kinda weird party or something goin' on next door," Duke said, lighting a stray joint he found in his pocket. He was curious and, anyway, he could always come back later to clean the place out-so Duke hoisted himself through the splintered window frame and dropped down onto the bare plot of ground behind the bookstore.

The space next to the East Village Bookstore had been converted into a unisex haircutting boutique, HAIRPOWER TO THE PEOPLE. It had a couple of windows in the rear wall, so Duke eased over to check things out.

"Man, world's totally fuckin' nuts!" he whistled. All the furniture had been piled against the walls and the front grates had been lowered. Bathed in unnaturally bright light, a bunch of Hell's Angels, dressed in full colors, were slow-dancing with the male hairdressers.

One of the Angels seemed to be holding a metallic object; light glinted on it brightly. Duke squinted, trying to determine if it was a gun or a knife-but it turned out to be neither. This particular Angel had a mechanical hook for a hand and, in thrall to the music, he pressed it deeply into the small of his partner's back.

Now Duke remembered. He'd seen this guy hanging out on St. Mark's Place, hassling passing tourists. The Angel would use his hook as bait, attracting the naive, the curious and the stupid, engage them in conversation, turn it strange, get pissed off and then beat the unsuspecting victim to a pulp with his steely contraption.

Duke winced-not his idea of a good time. He turned to re-enter the bookstore just as the music changed. The slow song segued into the raucous chords of the Dead Kennedys' "Too Drunk To Fuck," and the partygoers began to slam into each other like battered cars in a demolition derby.

Duke couldn't help himself-he started pogoing wildly-and that was his undoing. One of the Angels noticed his pale countenance bobbing up and down in the window. He let out a yell, directing all eyes towards the back of the barbershop. Everyone froze-and then, as if at a hidden command, an angry horde of sweaty, drug-crazed psychopaths charged the back door.

Duke frantically jumped at a fire escape ladder dangling just above his head and managed to grab hold of the bottom rung. He pulled his skinny, drug-wasted body up by sheer will alone. The Angel with the hook took a swipe at Duke's disappearing leg, snagging a strip of already frayed jeans.

The hot, noonday sun beat down on a frazzled Duke. He was squatting against the blue, cinderblock wall of the St. Mark's Cinema, very broke and totally stoned. Somehow he was gonna have to figure out another way to rip off the bookstore across the street-man, there was only one fucking clerk running the whole joint-that's practically an open invitation-shit, hitting a place like that should be as easy as taking a crap.

Doing the bathroom window again at night was flat out. Earlier in the day he'd seen a couple of repair guys with toolboxes and armloads of two-by-fours go into the shop, followed by a lot of hammering and drilling.

Armed robbery was also out of the question-the cops had confiscated his gun-something about one of his friends getting blown away while playing Russian Roulette with it.

Duke decided on the direct approach. He got up, crossed the street and stepped into the dank, ill-lit recesses of the bookstore. Books and pamphlets were casually strewn around on old wooden sale tables. Duke checked out the guy working at the front counter; a tall, long-haired dude with thick John Lennon granny glasses. The clerk seemed to be deeply engrossed in an underground comic-Zap #4, Duke guessed from the cover.

This'll be like taking candy from a fuckin' baby, he thought, walking back towards the very bathroom he'd broken into last night. To the right of the bathroom was a small messy office, created by running mass-market display racks out from the wall. Duke sidled in behind the makeshift barrier.

Inside, a half-eaten sandwich adorned a chipped wooden desk, next to tumbled stacks of indecipherable ledgers. A battered bicycle was chained to one of the legs. Duke simply tilted the desk back and slipped the lock free. Yeah, he'd take the bike-it had real value-not like those fucking books-you had to heist so many of them to make it worth your while.

He rummaged through the desk looking for cash, but came up empty. Duke shrugged, stuffed the sandwich in his pocket and wheeled the bike towards the exit.

Just as he was about to leave the premises, the bookstore clerk materialized in front of him-from out of thin air-blocking his path.

"Hey, man, what do you think you're doing? That doesn't belong to you. Please be cool and put it back," the apparition lectured. It was dressed in a faded tie-dyed T-shirt and ancient bell-bottoms. For sure this one don't live on the street, Duke thought.

"I really must ask you to split, or I'll be forced to call the police," the obstruction continued, grabbing the handlebars and attempting to wrest the bike from Duke.

That was a mistake. Duke popped the guy, knocking him to the floor.

"Get the fuck out of my way, asshole-I hate old hippies," Duke snarled, pushing the bicycle out of the store. He looked back to see if the clerk was going to try to get up and follow him, and felt the bike bump into something-or someone. Duke whirled around and found himself face to face with the one-armed Angel (the tourist he'd been messing with gladly fled).

"I remember you," the Angel gloated, raising his hook.