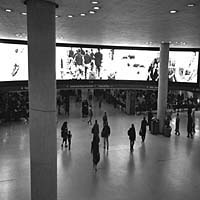 Sister Maria Annunziata sat with a tin cup in Penn Station. She sat there silently, clutched the cup in her lap, and stared down at the ground. She never once looked into the faces that belonged to the anonymous hands that dropped coins into her cup. For years she sat at that same spot and watched the shoe styles change from heavy Irish brogues to the flimsier narrow-toed Italian imports. Pennies turned to nickels to dimes and then-she did not know how old she was, how many years she had been sitting there in that station-then it was the heavy clink of quarters by which she measured time, not clock time-God's time, she called it. Each clink of a coin marked a celestial second; sixty clinks made a minute; sixty times sixty an hour of eternity. And when she felt the cup grow heavy, she knew it was time to go.

She folded the stool, clasped it under her arm, slipped the cup and its precious contents into a hidden pouch, and joined the crowd of shuffling shoes.

Not that she'd never had the urge to look up.

It was the frenzied click of running high heels on one particular evening that forced her eyes upward. The click of heels and a woman's shriek: No, Johnny, don't!

The nun pressed her frail body up against a column. It was late. Later than usual. The commuters had already disbursed for the day. She was alone in the station with high heels and Johnny. And from behind the column she watched as a tall lanky man dressed in white chased after a woman in red.

She watched as the man caught up with the woman, grabbed her by the back of her dress. Sister Maria shut her eyes and bit her lips as she heard the rip of cloth and the slap of an open palm across a face, and a howl that tore through the surrounding silence.

The man's footsteps retreated and the nun took all the courage she possessed and stepped out from the shadow of her hiding place. There on the filthy floor of the station lay the woman, shaking and sobbing, her dress split open, her shoes scattered about.

How long had it been since she'd touched or been touched by anyone but God?

She knelt down, lowered her head, and kissed the woman's back. Oh Holy Mother of God! she prayed aloud.

The woman stopped weeping. She turned and smiled: I have been waiting for you, Sister-remove your habit!

And without hesitation, the nun did as she was told, stripped herself naked and let the sacred garment fall to her feet. Now put on this torn red dress, the woman whispered, kissing the nun on her pale white breast. Yes, mother, said Sister Maria, her eyes downcast, as she heard the woman slip into her habit.

You will walk out into the street, said the Mother of God, and you will smile at the first man you see. And he will take you to a hotel and kiss your back and bosom. And the tin cup will no longer be large enough to hold the holy offerings.

But what of my shaven head, Mother? Will the man not laugh?

Yes, my daughter, he will laugh and he will call you mad. And he will take care of his lust and leave you lying naked on a strange mattress in a strange room.

But am I not too old for a man's touch, Mother?

The Mother of God laughed. Her bosom shook under the black cloth of her habit.

Jesus! she cried, and the man in white came running. Take her, Jesus, my son, said the Mother of God, and teach my daughter what it is to be alive before her time comes to die.

And Jesus led Sister Maria, now dressed in the torn red dress, to a public toilet. Lie down! he commanded. She felt his hands tear away the remains of the dress. She felt him roughly part her legs. And then she felt a fiery pain and something pierced her there between the legs, something like a giant thorn.

Jesus! Jesus! she wailed as the blood of her womanhood ran down her legs.

Sister Maria heard the clink of a coin in her cup. She heard the click of high heels receding among the shuffling shoes and she shivered for she knew she had had a holy vision.