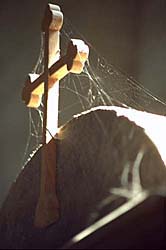 
A Young Girl Speaks
One spring a tornado came and twirled our house around like a top, it landed in the river. All my goldfish died. My mom died, too. Everybody felt sorry for us and brought food to this ugly trailer we had to live in for awhile. In two days there were two hams and three turkeys, a chocolate cake that read "make new friends" in pink and yellow icing. Seventeen pizzas we had to take out of the boxes and wedge in the freezer. A case of chicken noodle soup and a case of dogfood but we didn't have a dog. My sister and I lived on miniature marshmallows and couldn't have any pajama parties because there was no room. We used to cut big square shapes in the sod out back with a carving knife and get underneath and pretend it was blankets.


Her Mother Playing A Hand of Eight-Day Clock
White sheets waving on anybody's clothesline but mine used to set me off. Let me forget my two little mewling monsters. For just a moment I'd be eight years old again and the moon had hung itself in the mulberry tree. I had to set it loose. The kitchen screen door whispered because I oiled it, then I'd skip the splintered, squeaky step and there was the dew-drenching the hem of my white nightgown. I was dancing in the deep shadowed yard and only the moon was watching. I'd lie down and roll over and over soaking myself with the silver dew. Then the nightgown was crumpled in the grass like an accident as I climbed that tree as familiar to me as my own limbs. When I'd come down I'd pinch the heads off the roses and go to sleep with petals all over my sheets.


A 104 Year Old Woman Batting at Bees
My father was a timber cruiser for Fredric Weyerhaeuser. He hunted the last stands of the White Pine for lumbering and never had a moment's conscience about what he was doing. "Food on the table, food on the table" like a broken record. We wouldn't see him for months at a time. In the spring of '98, a freak snowstorm blew in and stranded him in a white silence. Lucky he killed a bear, ate the liver then and there, slit that poor thing wide open and crawled inside to keep warm. That black bear saved his life. I loved this story as a little girl and begged my father to tell it every night in warm weather when he stayed home.


A Black Bear
I can still remember that swirling May snowstorm and there I was up on my hind legs-stretching-when an angry man came at me with his moon shaped blade. I embraced him. I did. And we danced in circles as he drove that blade up high and hard into my heart. Then he crawled inside my heat and slept without any dreams until that storm blew itself out in the morning.

An Aleutian Woman Fixing Russian Style Tea
My father disappeared when I was a young woman. I wandered until my feet bled. I slept under ice blankets in a fever. A Polar bear swam to me and he crunched me up limb by limb. He ate my heart as the sky waved rags dipped in stars. He vomited me up. The sun came back out. I was tired but I was whole again.

Sitting and Smoking in the Morning
I was conceived in a firewatch tower in August of 1935. My father was working for FDR's Civilian Conservation Corps and my dear, shy mother used to climb a swaying, 150 foot ladder to visit in the endless, airless afternoons. It was a desperately dry summer and the trees used to explode. When I was older they both told me that fireballs rolled down from the hills like tumbleweeds and cut gutters and burning brooks right through the green.