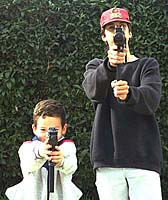 First there was Joanne (I can't remember her last name), a classmate of mine at Superior Street Elementary School. She was killed in a traffic accident-along with the driver and a dozen other kids, including the daughter of Roy Rogers and Dale Evans-on the way home from a Christian picnic. The bus hit a car, went out of control, and ran off a freeway overpass. Joanne and I sat next to each other in Mrs. Fields' first grade class. She was always teased about being a tomboy; during recess, she kicked balls while, in a corner of the playground, I jumped rope with the girls. At home, I saw the crushed, upside-down church bus on television, and heard words like "tragedy" and "celebrity" for the first time. My mother tried to explain it all to me. The next morning, someone put flowers on Joanne's empty chair. I remember staring at the aluminum foil wrapped around the stems.

Then there was Lee Ann Tate. She lived in the cul-de-sac that faced our house on Comanche Avenue. We used to get into terrible fights-I forget about what. She had younger twin brothers, both brats. One summer, my brother and a few of his friends from the neighborhood lured Lee Ann into a tent in our backyard and stuck a Barbie leg up her vagina. They bragged about it for weeks afterwards. The Tates had long since moved to Simi Valley when my mother handed me an article from The Green Sheet that said Lee Ann (eighteen) had died in a small boat that capsized off Catalina. Lee Ann and four young men-one of them her boyfriend? her fiance? There was a picture of the rescue team laying out the bodies on the beach. I saved the clipping for a while, then threw it away.

Kathe Lindsay, who lived down the block, made it to thirty-three, which surprised everybody.

When we were in junior high, they discovered a malignant tumor the size of a baseball in her uterus. That phrase was repeated a lot: "the size of a baseball." From then on, she was in and out of hospitals, but kept living, and was eventually able to lead (according to updates from my mother) a "normal" life. Kathe even got married, but couldn't-everyone commented-have kids. Years later, I attended her funeral, waited in a long line to give my condolences to her parents. Mr. Lindsay didn't recognize me; Mrs. Lindsay-Kathleen-did. We talked for a few seconds. I said something like: "I wish I could have known her better." Kathleen looked at me blankly, then turned to greet the next person in line.